to both the Dogs & Hogs during the hunting of wild pigs. 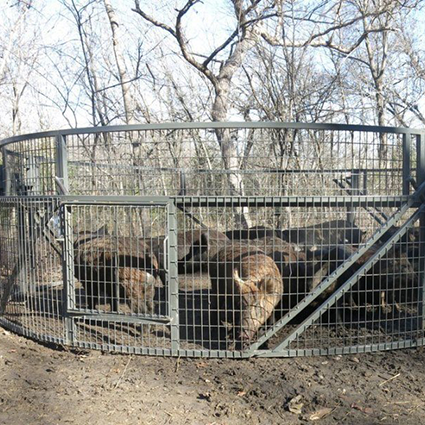 There are more humane options for dealing with pig over populations versus hog dog hunting. Ones in which do not need to involve brutally attacking them, slowly torturing and finally killing them while putting domesticated dogs in harm’s way.

Despite the existence of strict animal abuse laws in Florida and other states, the laws exempt dog owners from abiding by abuse laws. Hunters are allowed to use dogs, (also known as “hog-dogs” and “bait-dogs”) to bay and catch for the purpose of wild boar hunting. This practice is incredibly dangerous and very inhumane for both the dogs and hogs involved.

We’re not suggesting that hogs should no longer be hunted without dogs. However, hunting is actually the least effective form of removing them. One female pig (sow) can produce 30-50 offspring per year. Hunting only removes one pig at a time, while potentially injuring and bruising multiple dogs. It does nothing to curb the actual overpopulation problem.

We understand that many hunters hunt for the meat. A few 150lbs pigs can feed a family of 4 for a year. But while the family dines on swine, in more cases than not, the dogs used are chained or kept outside in makeshift kennels and are not taken care of properly. Bottom line is, hog dog hunting more often than not, is inhumane for both the dogs and hogs.

Below are articles that discuss more effective and humane ways of dealing with the wild hog overpopulation:

How to Get Rid of Feral Hogs or Pigs

Who Can Stop These Adorable Pigs?

The Fastest Way to Rid Your Land of Wild Hogs

Scientists Get Down & Dirty With DNA To Track Wild Pigs